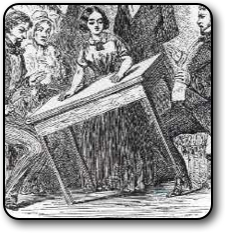 Of course I'd heard of Ouiji boards, but table tipping?  It was not until I happened to translate a very rare and obscure book published in 1911, by the leader of Mexico's 1910 Revolution and President of Mexico from 1911- 1913, no less, that I first came upon the term. Here is what that long-ago author, Don Francisco Madero, had to say about it in his Manual Espírita, or Spiritist Manual:

Q. Now I beg you to tell me, what is understood by table tipping?
A. This name designates the phenomena produced by small tables, or similar furniture, in transmitting messages by means of raps, as at a door.

Q. Of what importance is this phenomenon?
A. It was very great in the mid-19th century, the first days of Spiritism, and it still serves to confirm the Spiritist phenomenon in one of its most interesting phases; but as a means of communication, it has fallen into disuse as mechanical writing mediumship has proven both easier and faster.

Q. In enumerating these phenomena you have mentioned moving objects by means of psychic powers together with spirits’ powers. Can you tell me something about this interesting phenomenon?
A. It is the same as with the little tables.
Movements of objects by means of occult powers (which, for brevity, we will call psychic or spiritist) serves to demonstrate the existence of the invisible world which surrounds us and is interested in and cares about us and takes part in our endeavors.
As materialism was extending its unhealthy influence over the world’s most civilized nations, it was precisely the apparition of these very natural phenomena and others which were so clamorous in order to gain our attention. In sum, we can say that those phenomena at the origin of Spiritism were the knocks by which the spirits called at the door of our material world to announce their visit. Once we opened the door and admitted them into the house, in calmness and solemnity, they have revealed the object of their visit. They have come to tell us that our spirit is immortal, that life continues after our mortal shell has dissolved, that this life and space are one, that there is no debt that goes unpaid nor agreement that goes unfulfilled; in a word, they have revealed to us the Spiritist doctrine, as summarized in this manual. 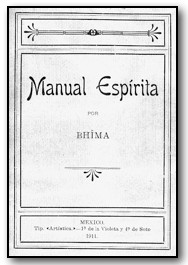 When, by happenstance (long story), I came upon Madero’s slender Manual Espírita in a Mexico City archive, I recognized that, whatever its contents, its political importance was profound, for it would illuminate the thinking of Mexico’s “Apostle of Democracy.” (This was a point made in Mexican historian Enrique Krauze’s Místico de la libertad in 1987.) At once I volunteered to translate it, figuring it would take, oh, maybe a couple of weekends. I had reason for such confidence: I’d already translated many works of short fiction and poetry by some of Mexico’s leading contemporary writers, and Madero’s can-do evangelical prose was, by comparison, pedestrian. The subject matter did not particularly appeal to me, yet neither did it give me pause; from highschool in California on, I’d dipped into esoteric literature, mainly on ESP, psychokinesis, reincarnation, remote viewing, UFOs, and out of body travel. So I was curious, and more than that: in some rock-solid yet mysterious way, I simply knew I had to do it.

Three years into this translation project, I was still slogging through the metaphysical literature, Hi-Liter in hand, trying to make sense out of so many concepts and phenomena that, though Madero presented them in simple language, were thoroughly exotic, for my previous reading in the fields of esoterica, broad as it was, had not provided me with the foundation of historical and philosophical context.

Table tipping, it turns out, first became a generalized phenomena in the mid 19th century with the Fox sisters, Kate and Maggie, in their house in upstate New York. Knocks and raps disturbed the girls, then they found they could clap and call out questions, and the noises, which they claimed came from a murdered peddler, returned an answer. As if by contagion, this phenomenon, as well as others such as pencils writing by themselves, or on a planchette, levitation, clairvoyance, the appearance of strange lights, levitation, "spirit photography," and —yes—tipping tables, spread quickly throughout the region, and into Canada, England, and Europe, as scores of mediums emerged, claiming to communicate with spirits. Spiritualism developed into a new religion, as did its French branch, Spiritism, led by Allen Kardec, author of the Spiritist classics, The Book on Mediums, The Book of Spirits, and many others.

Legions of curiosity-seekers as well as not a few leading intellectuals (among them, Victor Hugo, W. Crookes, and Alfred Russell Wallace), after attending séances, joined the ranks of the converted. Apart from the Fox sisters, who went on to spectacular fame, among the several outstanding mediums in this period were the Eddy Brothers from Vermont, William Stainton Moses in England, Eusalia Palladino in Europe, and the Scottish-born American Daniel Dunglas Home, who toured England and the continent, where he performed séances for the Emperor Louis Napoleon.

There is more to say about tipping tables, but why not have a look for yourself on YouTube? The following are modern videos of mediums and tables, purportedly tipped, spun, and even flown about, by spirits.
SELECTED TABLE TIPPING YOUTUBERIE

At the Bee and Thistle Inn in Lyme, Connecticut
http://www.youtube.com/watch?v=bvrir-arFOk
(Gets very interesting at about 5:30)

Small table gets violent with lone medium in France
http://www.youtube.com/watch?v=X0HobUgbgtQ

Read more about the Spiritist Manual and my translation, as well as Spritism in general, on the book’s dedicated website:
http://www.cmmayo.com/SPIRITISTMANUAL/spiritist-manual-HOME.html
which includes Q & A, podcasts, bibliographies, and other resources for researchers. 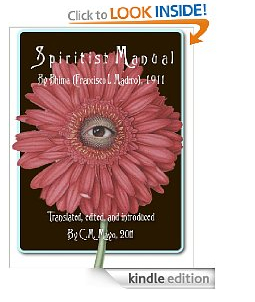 P.S. I’m working on a revised and expanded introduction for a second edition; if you’d like to be notified when that is available, I invite you to join my mailing list.
http://www.cmmayo.com/join-cmmayo-mailing-list.html

C.M. Mayo is the author of the novel The Last Prince of the Mexican Empire, which was selected as one of the best books of 2009 by Library Journal. She is also author of the widely-lauded travel memoir, Miraculous Air: Journey of a Thousand Miles through Baja California, the Other Mexico, and Sky Over El Nido (one of my favorite books), which won the Flannery O'Connor Award for Short Fiction.

Founding editor of Tameme, the bilingual Spanish/English) chapbook press, Mayo is also a translator of contemporary Mexican poetry and fiction. Her anthology of Mexican fiction in translation, Mexico: A Traveler's Literary Companion, was published by Whereabouts Press in March 2006
I could fill this blog with all of C.M. Mayo’s awards and accomplishments but instead, I’ll refer you to her Website at www.cmmayo.com  where you can read it all for yourself.