I have always been a Johnny Depp fan so it was a foregone conclusion that I would see him in the role of Tonto in The Lone Ranger movie. Unfortunately, the movie was a flop and Depp did not play the role of a disturbed Native American loner as much as he played the role of Johnny Depp in war-paint. But Tonto’s assertion that he was the last of the Comanche wendigo hunters interested me and I thought a discussion about wendigos would be timely for this blog.

The wendigo (spellings vary among Native American peoples) is a demonic spirit that appears in the traditions of Algonquin peoples along the Atlantic coast and in the northern US and Canada. Associated with winter, the North, coldness—as well as famine and starvation—the wendigo is a malevolent, cannibalistic, supernatural being with great spiritual power.

Basil Johnston, an Ojibwe teacher and scholar describes the wendigo:

The Weendigo was gaunt to the point of emaciation, its desiccated skin pulled tautly over its bones. With its bones pushing out against its skin, its complexion the ash gray of death, and its eyes pushed back deep into their sockets, the Weendigo looked like a gaunt skeleton recently disinterred from the grave. What lips it had were tattered and bloody [....] Unclean and suffering from suppurations of the flesh, the Weendigo gave off a strange and eerie odor of decay and decomposition, of death and corruption. 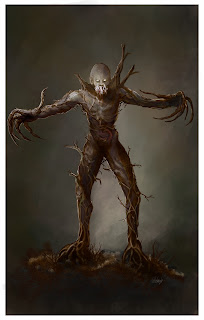 It was believed that a person could be turned into a wendigo if he engaged in cannibalism, as in a time of famine. A person could also be possessed by a wendigo appearing in his dreams. In some cultures, wendigos were depicted as giants. 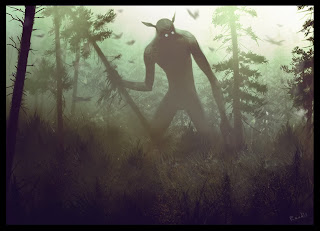 The wendigo had an insatiable appetite for human flesh and so came to epitomize gluttony, greed, and excess. Some wendigo stories say that the wendigo would grow in proportion to the human body it had just eaten, so that it could never be sated.

There is an interesting—but rare—psychological phenomena that supposedly occurred among Algonquin peoples in which the sufferer believed he had become a wendigo (I say “supposedly” because there is much debate over whether or not the condition actually existed.). These people may have consumed human flesh at some point, perhaps in famine, and so, developed an insatiable appetite for it, thus becoming wendigos.

In The Lone Ranger movie, Tonto believes that the outlaw Butch Cavendish is a wendigo and there is a scene in the film in which Cavendish cuts out an unrecognizable organ from the body of Ranger Dan Reid and apparently eats it. Algonquin peoples would affirm that such a barbaric act would turn Cavendish into a wendigo.

Whether or no wendigo psychosis, as it is called, is real or not there have been cases of human behavior that mimic the wendigo. 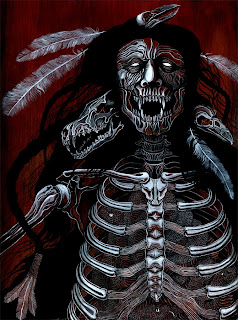 One of the more famous cases of wendigo psychosis involved a Plains Cree trapper from Alberta named Swift Runner. During the winter of 1878, Swift Runner and his family were starving, and his eldest son died. Twenty-five miles away from emergency food supplies at a Hudson's Bay Company post, Swift Runner butchered and ate his wife and five remaining children. Given that he resorted to cannibalism so near to food supplies and that he killed and consumed the remains of all those present, it was revealed that Swift Runner's was not a case of pure cannibalism as a last resort to avoid starvation, but rather of a man suffering from wendigo psychosis. He eventually confessed and was executed by authorities at  Fort Saskatchewan.

Another well-known case involving wendigo psychosis was that of Jack Fiddler, an  Oji-Cree chief and  shaman known for his powers in defeating Wendigos. In some cases this entailed euthanizing (some might say, murdering) people suffering from wendigo psychosis; as a result, in 1907, Fiddler and his brother Joseph were arrested by the Canadian authorities for murder. Jack committed suicide, but Joseph was tried and sentenced to life in prison. He was ultimately granted a pardon, but died three days later in jail before receiving the news of this pardon.

Wendigo legends persist today and the wendigo can be found in many modern horror stories and films. If the legends live on, one must wonder if somewhere in the vast, trackless North the wendigo itself lives on, forever hunting human flesh. 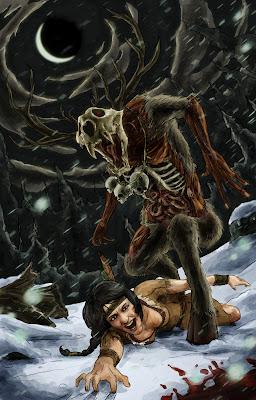